A few pics from the Paris readings 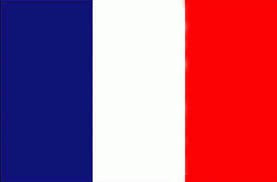 PARIS is so far from home, but it is perhaps my soul's home. This time, I found an awesome tiny little shoe box studio in the Bastille. It felt like the center of everything. Eventually, everything did flow through my neighborhood, on their way to whatever else Paris had waiting for them.

As soon as I arrived late at night from Morocco, I saw the embers of bonfires that had been burning all day from the Gilets Jaunes. It's a serious thing. Striking back at Macron was quite reasonable at first, but now it seems to be an all-out shit show with factions of Gilets Jaunes battling in the streets and an uprising of anti-semites and fascists. Why all the xenophobia? These are the symptoms of a world getting smaller. That's also the reason for France's abhorrence at the rise in gas tax. The fallout of this tax is that it affects almost exclusively the middle class; those people who rely on automobile transportation to bring goods into Paris and other cities and transportation across large spaces. Agricultural workers can't transport crops and supplies on public transit! But the rich live in big cities where a fuel tax won't hurt them directly.

One Friday afternoon, I was surprised by an angry mob of high school students. They raged up my street, howling and banging on things. I flipped on the news and guess what, a group of students had stood up for themselves on an internal school matter, they organized and presented a united front against school administration. The administration called the police. The police brought a SWAT team! The SWAT team made the students kneel out in the yard like common convicts. No dialogue. Only brute force, as if they were prisoners ... and even prisoners should not be treated as poorly as they were. So they came to Paris, several of them, marching for the Grandes Places and this gang came through headed for Place de La Republique.

That Saturday, it was hell throughout the city as three forces converged on Paris: Gilets Jaunes, the Lycéens, and the World Climate March! Make way for pissed off French people! My friend's restaurant close to Champs Elysées was smashed up. The Monoprix next to my studio was boarded up. A few shop windows next to my place were smashed. Not too bad. Protesters finally came through at about 9pm (we in the neighborhood had been waiting for them since noon), the cop copters hovered overhead. The rioters made their way back to the metro by smashing and singing songs, as if their soccer team had won.

THE WHOLE TRIP WAS GREAT and I love Paris and I know that everyone, at the end of the day, loves their city and their country.


A SPECIAL SHOUT OUT TO SHAKES & CO AND THE RED WHEELBARROW
for agreeing to carry my book for
Parisian poets to peruse and perhaps to purchase ;) 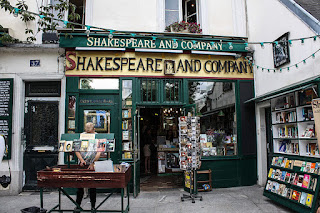 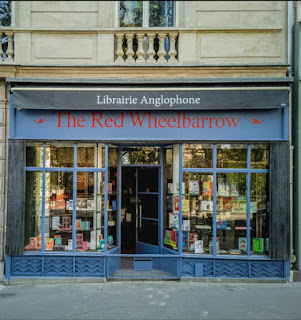