INTERVIEW
I met Laurie Woodward at Puffer's of Pismo. Charlie Puffer invited me to read. I had read at Puffer's before and I have read at other bars. I know what it's like. The first time I read at Puffer's, there was a drunk crowd at the back of the room who wouldn't stop cackling. I paid no mind. Charlie did his best to silence them. I appreciated it. Charlie, if you don't know him yet, is a superhero of sorts. He books awesome programming six nights a week, pours awesome wine from the area and beyond, and the place has an awesome little kitchen that offers a rotating menu of delectable eats to pair with the wine offered. Charlie is there every single night and knows most of his thousands of customers by name. Yes. Puffer's is tiny but the clientele runs in the thousands because the place is packed every. single. night. THANK YOU CHARLIE!!
So when Charlie asked me back, I figured the crowd would be a challenge. Bar folk. Not particularly poetry folk. What I found was both. We had a rollicking time together.
***
I read a few things from Critics of Mystery Marvel:
Immortal Desirous

Fifty “F***!”s in the car alone
slamming my hand
against the wheel, radio blaring

Speeding down a dark
tree-lined highway without headlights.
Still can’t erase that feeling

Complicit, you promised
to forget me. The ache
was so sweet we had to

The grinding of our heavy bones
lit sparks beneath the sheets.

Smoke the Roach of the Day

When all the day’s pain and all the day’s activities have been performed that can be performed and all the venom of the day coagulates to a concentration so thick it bears the common name of sunset, things can get progressively worse, but forgive me to the fullest of bearable capabilities for I am climbing ahead of myself, kicking my foot through the skin of my own paragraph.

Those precious last embers of the day shall, from here on, be referred to as the roach of the day. Once the teeth of itineraries have been plucked with iron tongs and the blood-spattered overgrowth of reckless sunlight has been wrapped up in a giant and mysteriously thin paper, the day is then smoked to its hilt. As the tars of day stick to twilight after sunset, thereby browning it, that is the roach.

When clouds mass on the horizon and toss around colors of the dying sun, it shall be said that the clouds are then smoking the roach of the day.

When humans stop what they’re doing to witness it all, at available viewpoints dotted throughout their reality, they too smoke the roach of the day.

Although the following sad fact does not help us enjoy sunsets any further, it must be said that Parisians refer to depression as the roaches, primarily at night. Hopefully the fruit and honey colors of the roach of the day might sweeten this idea somewhat, keeping in mind that Parisians are heavy brooders naturally, due to the excess of clouds and technical studies, and lacking from time taken away from the desk, to participate in the spinning of the planet on its heavenly axis.

Laurie approached me after the reading. She offered this interview. It was fun to do. I suppose I neglected to mention my book of nostalgic sea poems Death At Sea, the movie of the aphorisms of Fiercer Monsters called Mystic System of the Rosy Order, and Coney Island Siren, both filmed with the AVT crew in NYC. 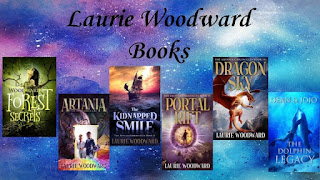 Laurie Woodward is a school teacher on the Central Coast of California, mother of two beautiful souls: Nick and Jess, and the author of Forest Secrets as well as the fantasy series: The Artania Chronicles. The first four books, The Pharaohs’ Cry,  Kidnapped Smile, Dragon Sky, and Portal Rift.

Her poetry has been published in multiple journals and anthologies and she was a collaborator on the popular anti-bullying DVD Resolutions. Bullied as a child, Laurie is now an award-winning peace consultant, poet,  and blogger who helps teach children how to avoid arguments, stop bullying, and maintain healthy friendships. She writes on the Central Coast of California. More about her work can be found at artania.net