One of my newest short stories, "Hassan Believed" was just published by Jersey Devil Press. Read it here.

Hassan believed in tradition. Hassan believed in routine. Hassan believed in the power of repetition. Hassan believed that if he should raise and lower his teacup a number of times every day, at the same time of day, in the same place on his kitchen table, that if he should leave the cup one day by itself... it would raise and lower on its own, by force of nature habituating itself to repeating stimulus. Is this the very nature of OCD? What if the town was in on it too? Would that count as mass hysteria? Hypnosis? Mehdi his neighbor confirmed that the teacup did actually move on its own. Other people witnessed the same phenomenon. Is this natural, a perversion of magic, or insanity? 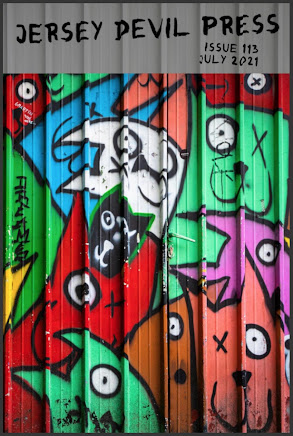 UPDATE: The video reading broadcast during our online presentation for the Clarion Alley Mural Project is now available. I'm about 18 minutes in, but all the poets for the whole project are very much worth your time and attention. Greatest thanks to Maw Shein Win for inviting me to be a part of this project and Megan Wilson and Sharif Zakout of Arab Resource and Organizing Center for creating this fabulous mural. I was touched by it in a few ways; first, I noticed the hills in the background look like gold coins and my piece "How the Sword Maiden Did Love A Young Man" ends with gold coins ringing in the air, never falling, never dying. Second, I noticed that not all faces depicted in the mural died for the cause of Palestinian liberation. One of them was Mehdi Ben Barka. Now this mural lives forever in my heart.