Chestnut Review - To the Baths of Azahara

Huge thank you and shoutout to the Chestnut Review for publishing what I consider to be one of my finest works yet! The editors asked me to remark upon the piece and I'll include that here in its entirety:

This poem is a devotional to classical Arabic epic poetry and a summation of the energies and ideas that came to the fore while wandering labyrinthine alleys of the ancient medina in Marrakech. Elaborate displays of spices, lamps, shoes, meat, perfume, whatever it is call out “Partake of me for I am beautiful.” The Baths of Azahara is a real place. The fountain and hammam of Ben Slimane are the oldest of the city. The protagonist is named Trik Jazouli, which roughly translates to “Path of (the person/object of) Jazoul.” In this poem, a tiny passageway from the medina is set vertical and made to wander the alleys and witness the dizzying splendor of the Ochre City, one of the busiest in Africa. In some places, the name for Morocco is still “Marrakech,” perhaps after the Amazigh (indigenous) word Murakush: “Land of God.” 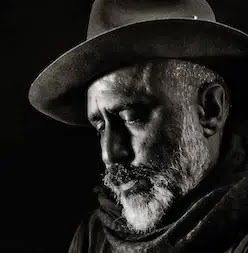 So odd this experience. I had no idea I had edited the poem -as- I submitted it. I made no note, no record of it, other than the submission itself. No one else altered the poem. I traced the file and found it on my hard drive... eventually.

To boot, I'm learning every day that I write and submit, about my own writing, my development, the effect it has on others, and about tastes in literature. What would be the line that drives a poem closer to a reader's heart? Surely, a poem is dormant until it is read or heard by the reader. The perceiver of a poem gives the poem life.

So when I substituted one line in a poem (and now I remember thinking this line alone would cause the piece to be published) and sent it off I had completely forgotten about it. Until ORP published it. They asked me to read the poem and send an audio file. I did that.

But I had recorded the original poem, not the lines they chose out of the multitudes. I suppose no one checked. I did not. I was on to other things. I showed up at the reading and met some pretty great people. We had a good time, did a good reading. I read the original poem. No one said anything. I posted the link to my public profile. Someone said, actually, a few people said "I like the written version better than the recorded version." I had no idea what they were talking about.

Then I read the version they published for the first time. Big surprise. I was shocked and even angered. I formulated the most sober and cogent letter I could render and sent a copy to three different addresses at the journal. It had in fact happened to me before; an editing nightmare where the editor of a journal printed my piece with some gouging edits without contacting me first for consent. I was incensed. The section editor got back to me right away. My head was blowing up. She said she was in complete agreement. That would have been an absolute publishing crime and she would never do that. She was so kind and polite about it too! I really admire her tact.

She showed me my original submission and there it was; the line. I found the original on my hard drive and there it was. The line had been changed. By me. As I submitted it and I left no record of it elsewhere. I remembered my thoughts as I submitted it to them, feeling that even though the line might have been facile by making an implicit moment explicit, perhaps that would meet with someone's taste more easily. Would I be spoon-feeding the poem to readers?

After much thought, no. Our goal is not to hide the imagery of a poem within itself, but to expose it smoothly without seeming trite. Now I have written too much on a simple poem that might be sipped in a sitting and then a reader would go on to the next interesting item on their agenda. But I thought I would put these words down about editing, and submitting, and communicating with editors in case it helps.

The poem can be found in its two versions here. I am still sculpting these verses to be included in my next book of poetry. It looks different today than either of these versions. Maybe I will publish it here on this post when it is ready... or maybe you'll see it when my book comes out!